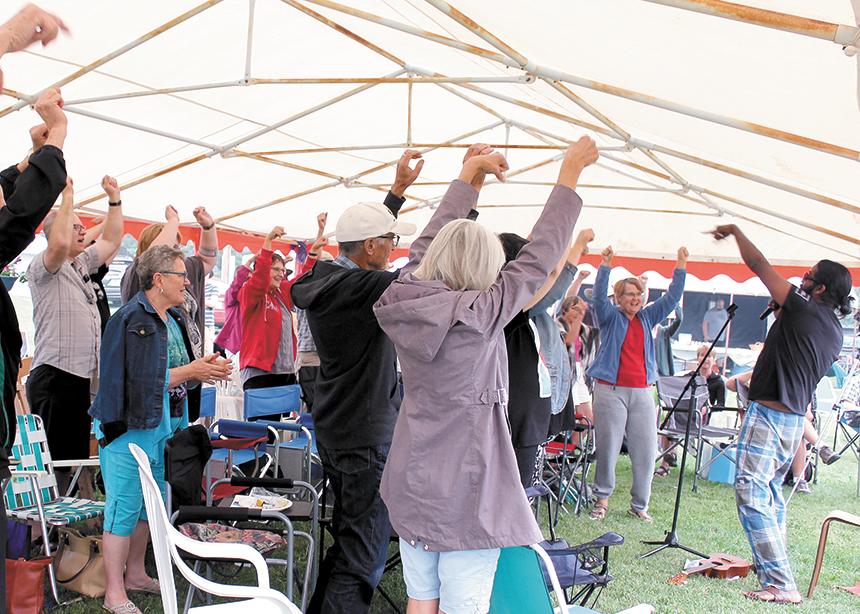 DS: How did you come to perform at Spruce River?

WS: A Mennonite friend suggested I watch a documentary called Reserve 107, through which I came to know about the festival. After watching this inspiring film, I contacted the festival and shared my work in building bridges using “cultural intelligence.” Ray Funk and Leonard Doell invited me to perform, and I’m honoured to be part of a festival that actively promotes reconciliation.

DS: How did you end up growing up in a Mennonite community? What were the positives and negatives of that experience?

WS: My parents knew a few Mennonite communities in Manitoba and Saskatchewan. I came from India to a small community just north of Saskatoon for school when I was 14. I lived with Mennonite guardians and attended a Bergthaler Mennonite school and youth group. They welcomed me with open arms even though I was the only person of colour in the community.

That said, some families were closed-minded and biased against people of colour and First Nations people. Of course, it’s important not to stereotype, as I know there are many Mennonite groups with different views. I am also a huge fan of the relief work MCC does around the world.

DS: How would you describe yourself in terms of faith?

WS: I first and foremost see myself as a child of God, a “simple superstar” who the Creator has endowed with intrinsic value and purpose. I think Christians continue to complicate the simple irreligious message of Christ by tying themselves to denominations and fighting over doctrines. They’re into church but not so much into Jesus.

As my friend Bruxy Cavey (of the Be In Christ [formerly Brethren in Christ] Church) would say: “If love guides our hearts, rules become redundant. Love, embraced as a guiding orientation of other-centredness, will always lead us to do the right thing.”

DS: Tell me about CQ and what you do as a “cultural intelligence” facilitator.

WS: CQ, or “cultural intelligence,” enables us to embrace cultural similarities and differences as we learn to engage with our perceived “other.” I offer interactive keynotes, workshops and concerts on cultural intelligence to schools and organizations around the world.

One meaningful project was working with Irene, a sex worker in Kasensero, a fishing village with one of the highest HIV/AIDS rates in Uganda. It was beautiful to hear her story and show the world she is a valuable, precious “simple superstar.”

This isn’t just about helping people relate to someone from another culture, it’s about building bridges for people who may not want to come close to someone like Irene or who may judge her for what she does for a living.

DS: What are your thoughts on reconciliation between First Nations and settler peoples? You used the term “reconciliaction.” Why is “action” so important?

WS: We can talk all we want about reconciliation, but until we take active steps to enter the world of our perceived “other” and form relationships, I’m afraid we won’t see change.

“Reconciliaction” is settlers and First Nations taking active steps to connect with one another and right the wrongs of the past. For some, “reconciliaction” is baby steps, like eating bannock, attending a powwow or having a conversation with an Indigenous person.

I love what my Cree friend, Kevin Joseph, shared with me after the pipe ceremony at Spruce River: “I have been beaten for being brown. I have been followed in stores by people who think I’m a thief. I have been on the receiving end of many racial abuses. For those who don’t like me, I’ll keep loving you. If you are stuck on the side of the road, I will help you. You may not like this, but this is where we begin.”

Kevin is willing to go all the way when it comes to “reconciliaction.” He is a counter-cultural “simple superstar” who loves unconditionally.

DS: Why do you say we are all “simple superstars”?

WS: Every human being, no matter how small or weak, has something to bring to humanity. Not everyone can be a superstar, but we all can be “simple superstars” who pursue greatness. There’s a big difference between fame and greatness.

We’re often told the path to success is gaining power, becoming famous. The “simple superstar” is not afraid of losing power [but becomes] great by serving others.

Martin Luther King Jr. said: “Everyone has the power for greatness—not for fame, but greatness—because greatness is determined by service.” 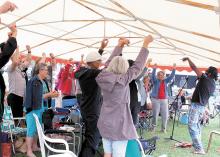