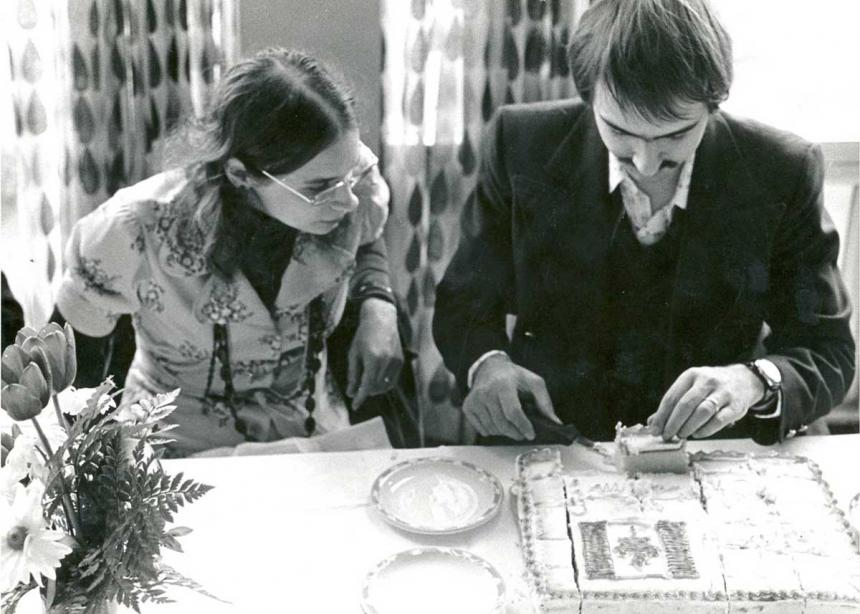 My husband Sam and I went out for lunch at the end of October to celebrate Sam's 50th anniversary of arriving in Canada as a Vietnam-era draft resister.

Back in Indiana, I had been part of what we would now call an intervention.  We his friends implored Sam to immigrate to Canada. We did not think his spirit could tolerate prison in the U.S. at that time.

We prevailed. So I wasn’t too surprised when Sam asked me to come along in the car taking him into Canada, so he could look for housing and a job. Then a week later I accompanied him again as he applied for landed immigrant status, conferred on November 2, 1968.

Sam and I were part of the same friendship group at Goshen College, but we had been dating for only a month before my two weekend trips to Canada.  We agreed the other day that my saying “yes” to those trips was the beginning of a larger “yes” to him. We married the next summer on the lawn of Conrad Grebel College, after at least four more weekend trips by me to Kitchener, as well as many letters and weekly phone calls.

Fifty years later, we believe that Sam coming to Canada and me joining him here were the best things that could have happened for both of us. Looking back, we’re amazed at how local Mennonites gifted us with both practical assistance and a sense of belonging in those scary early days and years.

1. Dan Leatherman, political science prof at Goshen, drove us to Canada those two weekends with his (then) wife Kathryn and their young family. Our lodging and meals that first weekend were provided by Kathryn’s Ontario family.

3. Jim Reusser, pastor of Stirling Ave. Mennonite Church, called Lester Zehr, president of Zehr’s Markets, about a job for Sam as a grocery clerk. Longer term lodging and meals were arranged with Stella Cressman, an aunt of Helen Reusser.

4. Aaron Klassen offered me a job as a cashier at Provident Bookstore in Kitchener, and Helen and Aaron often hosted us in their home. Eventually I became a book buyer for both the Kitchener and London stores, and stayed for 10 years.

5. Frank Epp, editor of the Mennonite Reporter, asked me to be a “church tramp” in 1973-74, visiting 11 local Mennonite churches in six different conferences and writing up the experiences for MR.

6. Sam’s second place of employment, Mutual Life Assurance Co., came about with the help of Jake Enns, Peter’s father. Sam left Mutual Life to complete his B.A. at the University of Waterloo in l973. There he found himself taking courses in Anabaptist/Mennonite history from profs Walter Klaassen and Frank Epp.

7. In the meantime, John W. Snyder, pastor of Rockway Mennonite Church, kept showing up at Provident Bookstore, engaging me in conversation. So when we two “lost children of Menno” were ready to return to our Mennonite roots, of course we joined Rockway.

8. In 1974 Frank Epp, by then president of Conrad Grebel College, offered Sam a half-time job in the archives. Sam eventually became full-time, took a year off to get a library degree, and stayed at Grebel over 34 years.

9. I left Provident after 10 years to earn an M.Div. degree at Associated Mennonite Biblical Seminary in Elkhart, IN, and eventually pastored a number of Ontario churches, including two I’d written up for the Mennonite Reporter.

I freely admit that those first few years in Canada were very difficult, as we adapted to a new country and to a relationship without much history. Yet I give profound thanks that Sam decided to come to Canada as a draft resister. For here we found a community that nourished us and supported both of our vocations. Here also our “relationship without much history” translated by God’s grace into a long and mutually-supportive marriage.

I’m thankful beyond words for the Mennonite community here in Waterloo Region, then and now. I delight in the topography here which reminds me of southeastern Pennsylvania. And I love living in a city with an obvious multicultural feel.

I reveled in that feel again recently, when a vibrant young woman from Syria sat beside me on the city bus. Soon her beautiful two-year-old son fell asleep in his stroller.

“He’s been up since 6:00. He goes with me to English lessons,” she said. “I want to go to college,” she continued, “and study more English, so I can help him when he goes to school.”

How, I wondered, is our community welcoming this wonderful young woman, as Sam and I were welcomed here so many years ago?

Sue Steiner is a spiritual director and retired pastor from Kitchener, Ont. This article originally appeared on her blog, A Nourished Spirit. 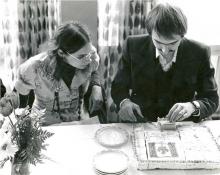