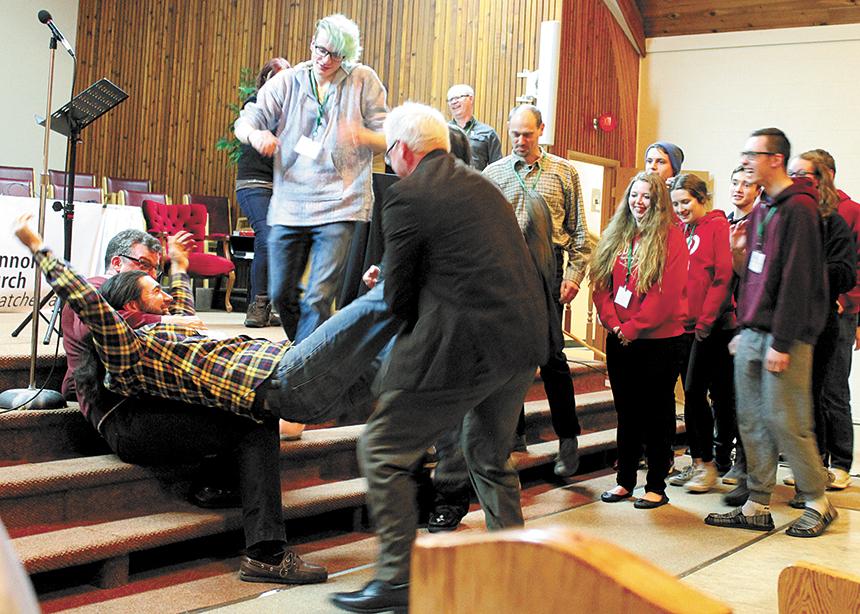 While a budget and elections were most definitely on the table, delegates at the March 9 and 10 sessions also witnessed the culmination of the yearlong Refresh, Refocus, Renew process, in which the regional church engaged consultant Betty Pries to help them set a course for the future.

Speaking at Zion Mennonite Church in Swift Current, Pries reflected on Jesus’ Parable of the Good Samaritan. After volunteers presented the story dramatically, she asked her audience, “With whom do we identify?”

Many identify with the Samaritan, and while it’s good to aspire to this level of compassion and generosity, privileged western readers may be missing the point of the story, she suggested. “By identifying with the Samaritan, we come out as heroes,” said Pries. “What happens when we see ourselves as people who save others rather than those who need saving?”

Alternatively, she challenged her audience to identify with the wounded man, and to see the Samaritan as a Christ figure. Perhaps when Jesus told the first hearers of the parable to “go and do likewise,” he was really saying, “Go and allow yourself to be vulnerable, to be cared for by someone who is distasteful to you. Go and allow yourself to be cared for and transformed by me,” she said.

“What would it mean for MC Saskatchewan to become like this?” she asked before urging her audience to “get in touch with your vulnerability, your brokenness. Recognize Jesus in people you dislike. Allow yourself to be healed by God’s great love.” But at the same time, she said, “Become like the Samaritan. Look after those in need of healing.”

Both interpretations are needed, according to Pries. “MC Saskatchewan longs to be transformed and to be an instrument of transformation in the world,” she said. “To love God with heart, soul and mind allows us to be transformed by God, and to love our neighbour as our self is to allow God’s love to transform the world through us.”

During the March 10 morning session, Pries looked back on the Refresh, Refocus, Renew process. She cited author Frederick Buechner, who said, “The place God calls you to is the place where your deep gladness and the world’s deep hunger meet.”

The world’s deep hunger, she said, is profound loneliness and longing to belong. It is a yearning for inner rest and a desire for meaning. By contrast, the church’s deep gladness is a sense of meaning, purpose and belonging. “We believe in a God to whom we belong and in whom we also belong to one another,” she said.

If Buechner’s statement is indeed true, she said that “MC Saskatchewan’s deep gladness and the world’s deep hunger [represent] a profound missional moment, both in our pews and in our world.”

The Refresh, Refocus, Renew process began last March with a survey asking members to share what MC Saskatchewan means to them.

In April, members of the regional church’s 28 congregations met with Pries to engage the survey results and ponder what it means to be the church in the 21st century.

During the summer months, congregations entered a season of listening and prayer, seeking God’s direction for their regional church body.

The regional church will spend the next three years implementing these three themes, one theme each year, in ways that will engage individuals, committees, congregations and the whole of MC Saskatchewan in various ways.

For Year One (2018) the regional church will focus on “Deepening our walk with Christ.” The reference group is offering members suggestions in the form of two bucket lists. Bucket No. 1 contains ideas that require less energy, while Bucket No. 2 contains ideas that demand greater energy. Members will be encouraged to choose items from each list and to evaluate their experiences after six months.

New items include $127,000 designated for the nationwide church, $50,000 for Canadian Mennonite University and $10,000 for Anabaptist Mennonite Biblical Seminary.

Thanks to a bequest, the regional church ended 2017 with a surplus of just under $100,000. The surplus will replenish the church’s reserve fund, which had been depleted in recent years.

Delegates also approved the Youth Farm Bible Camp’s plans to build a year-round riding arena to further its horse program. The arena is expected to cost $285,000, but the camp hopes to have half of that amount raised before construction begins this summer. 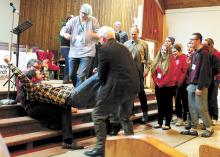 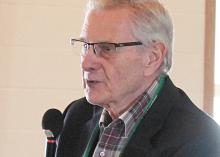 Victoria Neufeldt, right, of First Mennonite Church in Saskatoon, raises her hand to ask a question during a workshop on congregational partnerships at the MC Saskatchewan annual delegate sessions. (Photo by Donna Schulz)